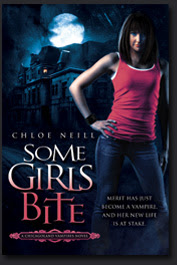 Grade:B I had first posted the second book in the Chicagoland vampire series as the Teaser Tuesday #2.                                                                   The first book, Some Girls Bite's blurb: "..She’s traded sweating over her thesis for learning to fit in at a Hyde Park mansion full of vamps loyal to Ethan “Lord o’ the Manor” Sullivan. Of course, as a tall, green-eyed, four-hundred- year-old vampire, he has centuries’ worth of charm, but unfortunately he expects her gratitude— and servitude. But an inconvenient sunlight allergy and Ethan’s attitude are the least of her concerns. Someone’s still out to get her.."
Chloe Neill's debut book is a straight-forward Urban Fantasy novel. The novel is set in modern day Chicago, in a world where the vampires are about to reveal their presence to the humans. All vampires either belong to Houses, or are Rogues. Three of these vamp houses are in Chicago, and all the action in the novel centers around them.
Merit, a human Ph.D. student from a prominent Chicago family, gets changed into a Vampire as a result of an attack in the park by a rogue vampire. The attack nearly kills her, and to save her life, the Master of one of the Houses changes her. It soon becomes evident that she is stronger and faster than the average vamp, and she gets named Sentinel of her House, a sort of chief Bodyguard. She begins investigating the series of murders, in which she had nearly became a victim herself.
The action in this novel isn't as fast paced as it could have been, and Merit just seemed to slip a little too easily into an action-oriented lifestyle, after a life spent as a research student. Except for this part, I really enjoyed her character and the learning process she goes through as a newly-inducted vamp. All said and done, this book made me want to read the second Chloe Neill immediately.

Book 2: Friday Night Bites                                                 Grade: A-                                                                                Excerpt: "Folks, we're at a crossroads here. We've been outed, we've been investigated by Congress, and now we've got the paparazzi breathing down our necks."                                           This second book gives us a closer look at Merit's family. Her internal vampire also seems to be behaving as a different entity, and she has to work at controlling its impulses. Merit is being wooed by the head of another House, and has to balance both this new budding romance and her job/life as Sentinel of a House. The Master of her House, Ethan, and her have some significant chemistry going on, so that complicates things :). Ethan also begins showing some signs of humanity, perhaps woken up by Merit.
Plus: One of the nicest things about this series is its Chicago setting. Having spent some time in this city, reading about all the familiar areas is nostalgic. I also enjoyed all of Merit's training sessions with her katana, and her instructer, the mysterious Catcher.
Minus: I really wished that Merit would talk to people about her doubts regarding the vampire inside her! Sometimes, things can be solved easily, without all that drama...but not in this book! I also didn't realize why being a vampire/witch meant that you had to give up your life-from-before or your JOB....perhaps I'm being pedantic, but if society has been unaware of a sub-species, shouldn't that mean that they integrated really well? With information being so widely available in today's world, any isolated group of people would be under government suspicion sooner than later.
Overall, the book has plenty of humor and sarcastic wit. I would rate this pretty high, and Ms. Neill is comparable to the guru of this kind of wit, Jim Butcher, and also Urban Fantasy doyennes, Patricia Briggs and Kelley Armstrong. Perhaps the plot is not as strong as it could be, but the characters are well drawn!

Posted by Deepali at 5:21 PM
Email ThisBlogThis!Share to TwitterShare to FacebookShare to Pinterest