Amazon releasing next Kindle at $139

More news out on that - we now expect the release to be on August 27th, book in advance as of today! 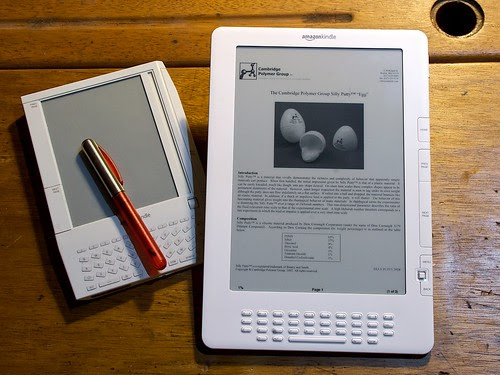 Two new flavors are being released - a $189 version (same price as now) with updates, wifi, 3GS AND a $139 version with only WiFi. The latter would be great for those countries that the Kindle won't go online for free in - like India. Colors available are Graphite and White.

Also, when I speculated that the touch-screen would be the biggest distinction between the kindle and the other readers/ipad, it appears that Amazon has focused on being just an ebook-reader "A solo purpose device". So no touchscreen.

In other interesting developments, Amazon annouced that they will integrate with Facebook, and allow friends to recommend stuff for you to buy on Amazon! Can you imagine how easy now recommending books/stuff gets? It is one pitstop on your kindle.

Of course, they won't be sharing actual purchase information, so your purchases remain private.

Lighter, Better, Faster and with twice the memory, the new Kindle creates tougher competition in this tightly contested market than ever before.

Posted by Deepali at 8:54 PM
Email ThisBlogThis!Share to TwitterShare to FacebookShare to Pinterest